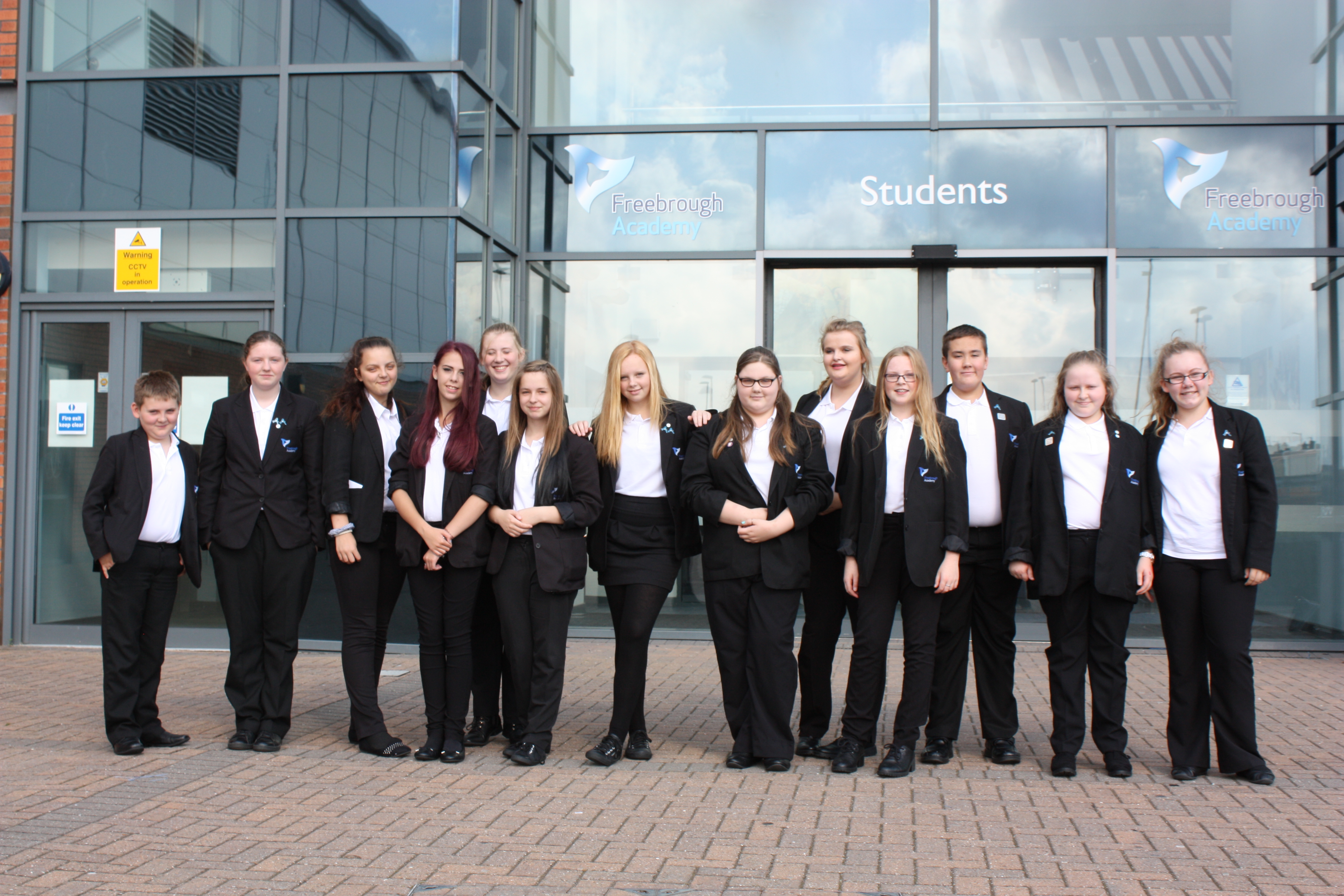 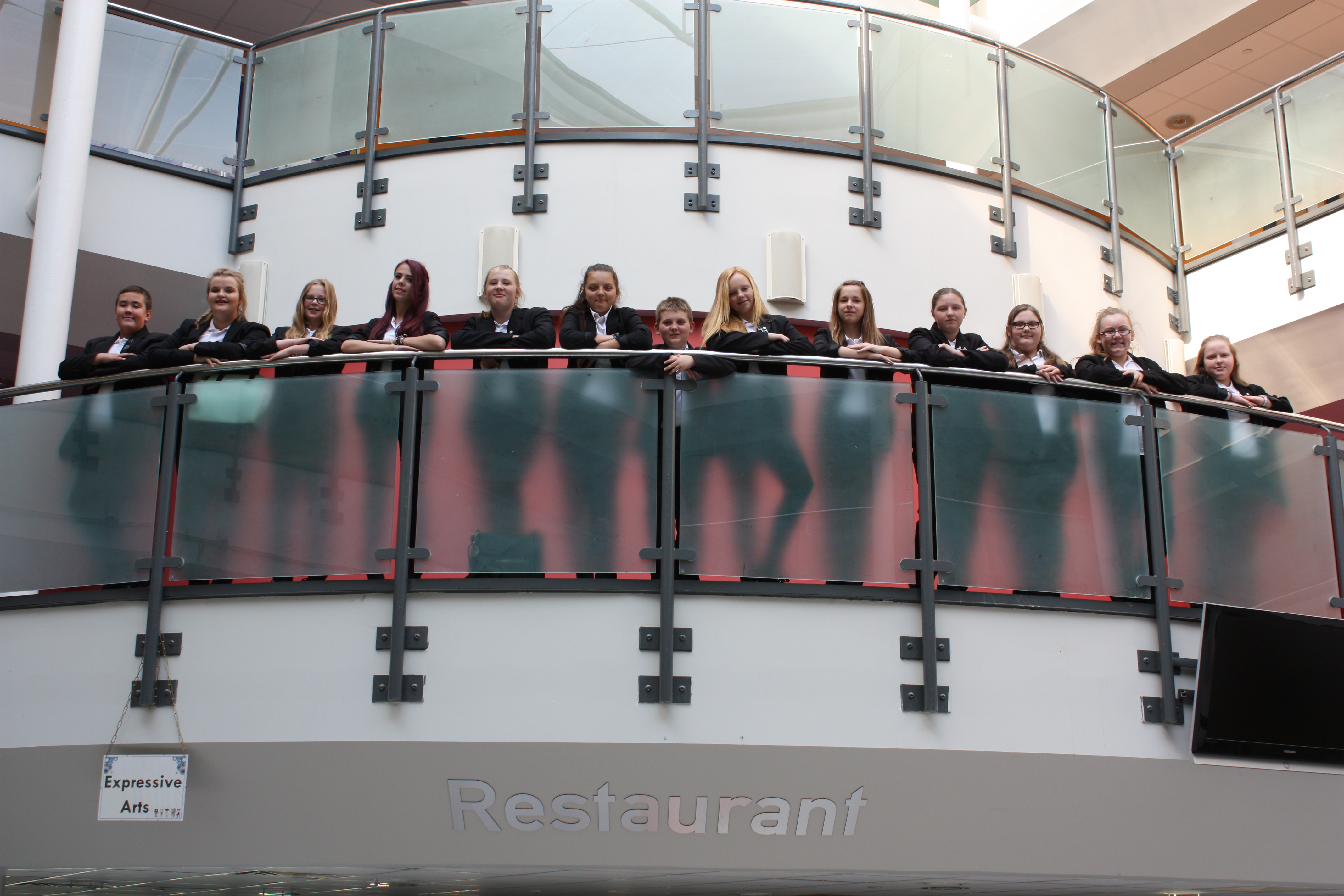 The FAB (Freebrough Against Bullying) Team have continued to go from strength to strength with visits to local primary schools, a feature on the local news and a national award!

The team were nominated for a Diana Award for their outstanding effort in raising awareness of bullying and their peer mentoring programme. Freebrough Academy is one of the only schools in our region to offer support to students in this way. Libby and Adam were chosen to travel to London on 11 March 2013 to accept the award on behalf of the team.  Year 8 student Amy Oglesby was also chosen to receive an award for overcoming her own barriers and becoming a peer mentor to others.

The Diana Award was founded in 1999 by the UK Government to act as a lasting legacy to Princess Diana’s belief in the power of young people to change the world. Their vision is to promote a culture that celebrates young people from all sections of society who have made a selfless contribution to their community.

The team was also featured by Look North who came into showcase the ground-breaking work they are doing with anti-bullying consultant Kate Hillyard. 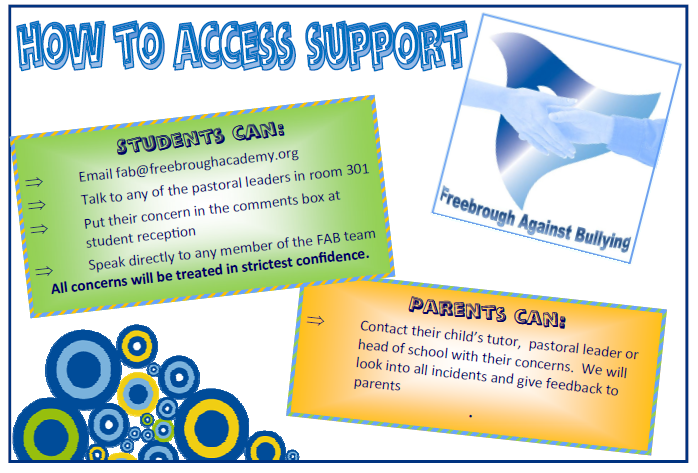 Bullying, What can we do? 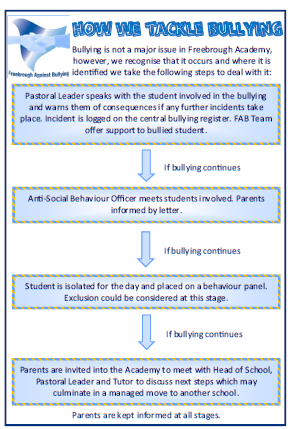 Although at Freebrough Academy bullying

is not a major issue, we recognise that it happens, we deal with it swiftly and we want to take every step to reduce its occurrence.

Please see below for a guide on bullying and how to deal with it.

What is bullying?
Bullying is deliberately hurtful behaviour which is repeated over a period of time and where it is difficult for the person who is being bullied to defend themselves.

One fight or disagreement is not necessarily bullying.  Friendship issues are very common, especially among girls.  Often rumours are spread and others become involved to stir up trouble.  Although this needs nipping in the bud to prevent it from escalating, it is not bullying.  Mediation between students who have fallen out is often very successful.

What can I do if my child is being bullied?

Stay calm, tell your child it is not their fault and you will deal with it together. Children and young people can often become more distressed if they feel that you are powerless or very upset. Try to keep your emotions under control even if bullying brings back bad memories for you.

In the first instance you should contact your child??s tutor at the Academy to report bullying and they will ensure that the matter is dealt with by the appropriate member of staff. You can also contact the Pastoral Leader for your child??s small school as detailed below:

Your child can email the FAB (Freebrough Against Bullying) team in confidence to request their support or alert them to any bullying issues at fab@freebroughacademy.org

Rumour spreading, leaving someone out, jeering and laughing

Incidents that are violent should always be reported.  Sometimes it is necessary to involve the police.

Encourage your child not to use, or retaliate with, violence.

Racism is the targeting of an individual because they are of a particular ethnic origin.  This includes: making fun of their customs, music, accent or dress or refusing to work with others due to their different origin or religion.

Teach your child to respect others

Homophobic bullying covers any hostile or offensive actions against those who are gay or bisexual, including:  social exclusion, harassment, insulting or degrading comments, taunts and ??jokes??.

Young people who suffer from this type of bullying often find it difficult to ask for help as they are worried they will be judged.

This is when technology is used to hurt others. This can be done through text messages, photos, video clips, email, chat rooms, MSN instant messaging, games consoles and social networking (such as Facebook and Twitter).

If your child is cyberbullied you can take the following steps:

*Report it to the service provider,

*Do not respond to any messages.

Encourage your child to use technology safely and appropriately.

Freebrough Academy is committed to the safeguarding of all children.
If members of the community have any safeguarding concerns, please telephone Mrs Helen Porter at the Academy on 01287 676305 or email: safeguarding@freebroughacademy.org

Please see our Safeguarding webpage for information and guidance e.g. about keeping your child safe and e-safety tips.

ParentInfo has been developed by Parentzone in collaboration with CEOP, to provide high quality information to parents and carers about their children’s wellbeing and resilience. It also includes important advice on how best to keep children safe whilst online.

For more information on protecting young people from radicalisation and extremism (PREVENT), please click the image below.

Please click on the link below to view the leaflet “Staying Safe Online” from Cleveland Police.

All members of our Academy community will live by our shared values. Our students will be engaged and excited by the learning experiences and opportunities at Freebrough. This will result in them having the highest aspirations and expectations for themselves and their community.

Our specialisms of Business and Enterprise will support the creation of a vibrant learning community, in which young people are inspired and motivated to achieve excellence, whilst immersed in a positive, can do culture.

Standards of achievement for all of our students will be as high as they can be through the provision of an innovative curriculum, quality first teaching and learning and a swift response to the needs of learners to ensure that appropriate support enables them to reach their full potential.

How to find us

About 3 hours ago · reply · retweet · favourite

RT @RedcarCollege Welcome to all the students from @FreebroughAcad @StPetersCVA @RyeHillsAcademy who are on college tasters will us today! Enjoy guys!

About 3 days ago · reply · retweet · favourite

About 2 weeks ago · reply · retweet · favourite